Be aware of Census scams

During the census, you may have become aware of a number of online phishing scams attempting to defraud the public.

Now that Census Day has passed, scammers are taking the opportunity to take advantage of the potential fine imposed onto non-compliant members of the public. This has resulted in an array of phishing sites going live. They mimic the look and layout of the official Census website but demand a payment due to ‘late fees’ or ‘incorrect information’. They ask for card and bank details giving them full access to take a victim’s funds.

All of the scams so far appear to have been distributed through SMS messages, like the one shown below, which provide a malicious URL link to send the victim to the phishing site, citing that they need to pay a fee for late or incorrect completion of the census and they must fill in the scammers form to rectify this. In doing so they are giving away their personal and financial information. 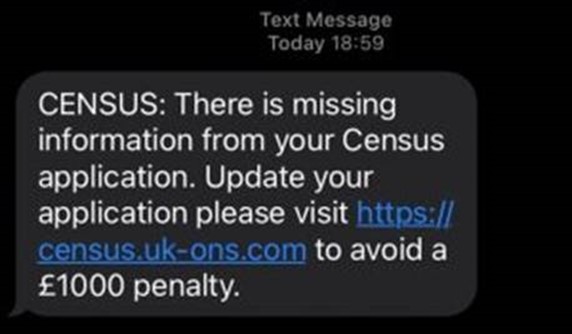 Once scam campaigns have been identified by the census teams, the hosting companies are contacted to initiate takedown proceedings. This includes having them removed from the web and marked as a malicious site on web browsers to prevent anyone from visiting the site. Once discovered, the average time for a takedown to complete is one hour, with the site becoming completely inaccessible within 3 hours. To date there have been 60 census scam sites removed from the internet, potentially preventing hundreds of individual fraud cases.

To raise public awareness around these scams, the Census team have published an Action Fraud article.  This contains important information on how to spot scams and, if you have been the victim of one, how to report it to the appropriate organisations.

If you notice any suspicious sites or become aware of scams, please get in touch at 2021Census.LA.Liaison@ons.gov.uk.